Asbestos use has rapidly declined over the years. But the effects of asbestos exposure are still expected to appear over the next few years. It takes 15 – 40 years for the symptoms of asbestos to manifest itself in the human body. Those who know or at least think they have been exposed to asbestos should be on the look out for asbestos exposure symptoms.

Asbestos – what is it and how was it used?

Asbestos was mined and used before the 1900s. It was during the 1940s – 1980s that asbestos use increased drastically. Asbestos is a cluster of minerals that appear as very thin separable fibers. Asbestos can resist heat, fire, and certain chemicals.

The construction industry was a heavy user of asbestos. It was added to cement plastic materials to make them stronger. It was used in insulation, roofing, soundproofing and fireproofing. The automotive industry also used asbestos specifically in brake-liners and clutch-plates. Asbestos was also used by the shipping industry for steam or hot water pipes and boilers in ships. Paints, adhesives, floor and ceiling tiles were sometimes manufactured with asbestos.

The most common symptoms of asbestos exposure are: 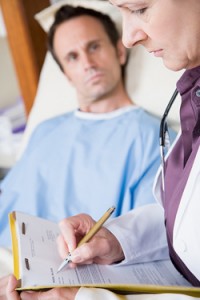 The symptoms above are also common to other illnesses. Experiencing any of the above symptoms does not mean that the medical condition is related to asbestos exposure. Plus, it takes years before symptoms of exposure to asbestos occur.

If any of the symptoms are present, consulting a qualified physician is a must. The physician may request for an X-ray or a CT scan to rule out different illnesses including asbestos exposure. For severe cases, the physician usually requests for a lung biopsy. The earlier the symptoms are checked, the better for the exposed party.

Three of the main health issues caused by asbestos exposure are:

Individuals at risk of asbestos exposure

The people most at risk of exposure to asbestos are those who worked in the following capacities during the 1940s to the end of the 1980s.

The problem with asbestos is that you cannot see it with your naked eye. Workers can carry asbestos on their clothes or on their hair. This is how asbestos fibers travel from one individual to another and one location to another. If you have asbestos exposure symptoms, do not ignore these symptoms. See your doctor immediately before it’s too late.